With a name like Lois Lane, you have to be super. So how did this super band get started? Read on for a brief history of Lois Lane and the Daily Planets!

Lois Lane has been singing in bands since she was fifteen years old. The first time she got paid for singing was at a club in Revere Beach, MA called Scarbourgh Fair. Lois opened up for a then up-and-coming  local Boston band called AeroSmith (Miles Beyond). Lois also went to different clubs and hotels and sat in. Lois was too young to enter the clubs, but the club managers recognized her talent even at her young age and allowed her inside to sing.

When Lois was seventeen, one of her favorite places was Sandy's in Beverly, MA. Sandy's had the best jazz and jazz musicians on Boston's North Shore. It just so happened that Lois' best friend's mother was dating Sandy at the time and that was Lois' guarantee in the club. It was at Sandy's that Lois sat in with Phil Wilson, Ted Casher, Joe Sampel and Al Vega, just to name a few.

Lois also went to Cambridge, MA on Sundays and sang with blues legend Silas Hubbard at the 1369, or she went to the Plough and Stars and sang with another good friend, Bunny Smith. Later, Lois joined several other bands and performed locally for private functions.

In 1979, Lois joined a band named Right On Time. Right On Time had a large following for many years. Lois then joined a well-established local band named Back Alley Band. This band had a strong sense of family and respect and Lois took note. Lois was with Back Alley Band two years when the thought of having her own band surfaced. In the meantime, Lois went to many auditions and just could not find a perfect musical match.

Lois then joined a local group with national connections named the G Clefs. After a few personnel changes, Lois shared her idea of starting a new band and the remaining members were all in. Lois came up with the catchy name, augmenting her personal name with the newspaper title from the Superman comics. This was the birth of Lois Lane and the Daily Planets.

Through the years, Lois Lane and the Daily Planets has gone through many musician line ups and played thousands of clubs, functions, parties, benefits, cruise ships, weddings and concerts. One thing that hasn't changed is our love of performing and living life to the fullest. 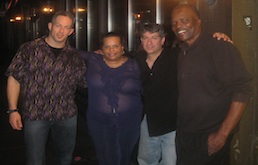 Lois Lane and the Daily Planets are known for getting and keeping the crowd on the feet dancing, laughing and generally having a great time. We enjoy entertaining and celebrating at our performances.

If you need live music for your event, then please contact us and we'll be glad to help. We hope to see you at one of our upcoming performances soon!


For Bookings and General Information